There’s a new player in the Botox game… Xeomin!

The list of competitors to the game leader, Botox, is growing, but are any of the new products actually better? Or are all the new choices just making it more confusing? Botox, Dysport and Xeomin have a lot in common, but they also have some important differences. Unlike its predecessors, Xeomin does not need to be refrigerated. This may be an advantage when it comes to distribution. What’s more, Xeomin is “naked.” There are no additives — just botulinum toxin type A. This may lessen a patient’s likelihood of developing antibodies to Xeomin. When your body senses a foreign invader, it responds by creating antibodies and launching an attack. If this were to occur with a neurotoxin such as botulinum toxin type A, it may not have its desired effects. Xeomin is said to be more like Botox than Dysport. It takes about one week for the full effects of Xeomin injections to be realized, and once this occurs the results last from three to six months.

It works-and it’s probably and option that’s here to stay. Still wondering which of these injectable wrinkle relaxing treatments is better? Our view is that, like Coke vs Pepsi, it’s a matter of personal preference.

Perhaps you’d like to do your own “taste test” and try a Xeomin vs. Botox/Dysport experiment at our Xeomin Launch Party March 16th.

This entry was posted on Tuesday, February 28th, 2012 at 8:39 pm and is filed under Botox/Dysport, Cosmetic Procedures, Office Life. You can follow any responses to this entry through the RSS 2.0 feed. You can leave a response, or trackback from your own site. 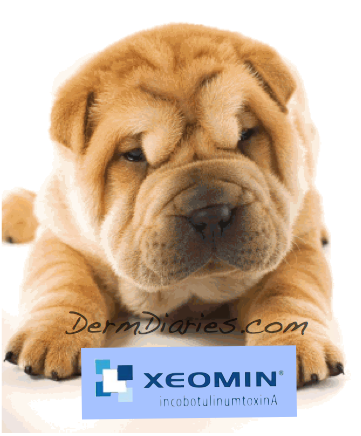 First there was Botox, then came Dysport, and come this spring there will be a third option: Xeomin (incobotulinumtoxinA). The Food and Drug Administration (FDA) approved Xeomin in July 2011 for the treatment of severe frown lines or “11’s” between the eyes. Xeomin was already FDA approved for use in adults with cervical dystonia and blepharospasm.

While it’s still unknown how Xeomin will compare to Botox and Dysport, we do know that Xeomin is formulated differently without any additives possibly making it less likely to cause adverse reactions. Xeomin is also the only FDA-approved botulinum toxin that does not require refrigeration.

You’ll have to wait a few more months for Xeomin to be available. As soon as more information is available we’ll be sure to let you know.

This entry was posted on Monday, August 1st, 2011 at 12:44 pm and is filed under Botox/Dysport. You can follow any responses to this entry through the RSS 2.0 feed. You can leave a response, or trackback from your own site.