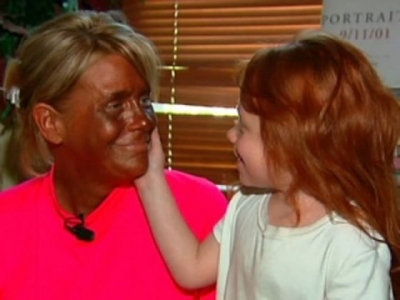 A New Jersey woman has been charged with felony child endangerment after she allegedly took her five-year-old daughter into a tanning booth, where the child suffered serious burns. Even Snooki, the tanning queen herself, does not approve.

The investigation of Krentcil began after cops were summoned to the elementary school attended by the kindergartener, who was in pain due to what appeared to be a severe sunburn. The subsequent probe determined, cops allege, that Krentcil took her child into a tanning booth at a Nutley parlor a week prior to her April 24 arrest.

State law bars children under the age of 14 from using a tanning facility. Investigators contend that Krentcil brought her daughter into a stand-up tanning booth without the knowledge of parlor employees.

Putting a 5 year old in a tanning bed is horrible for any child but would be especially dangerous for this beautiful little girl. The risk of melanoma is more than 10 times higher for whites than for African Americans. Whites with fair skin, freckles, or red or blond hair have a higher risk of melanoma. Red-haired people have the highest risk. There’s no such thing as a “healthy” tan. The damage to the skin is irreversible. Children are particularly vulnerable. Yet because tanning is thought of as a sign of health, affluence and beauty in our culture, people don’t take the risks seriously.

This entry was posted on Thursday, May 3rd, 2012 at 5:16 pm and is filed under Celebrities, Skin Cancer. You can follow any responses to this entry through the RSS 2.0 feed. You can leave a response, or trackback from your own site.